Last April 22 I was invited/part of a small group to view the preparations at the Rotterdam Theatre for the 3rd. theatrical production by Urland, a Dutch performance group which has already produced two earlier thematic projects with the role of technology/iot as basics. This 3rd. production contemplates the role of objects and their relation to technology, in part (re)viewed by a most elegant acting industrial robot-arm. Afterwards we had a most interesting discussion concerning technology and theatre in general, but in particular their views on IoT and the relevant philosophy. Their approach and the theatrical results so far make me very curious to an interesting final performance scheduled for September 2016. 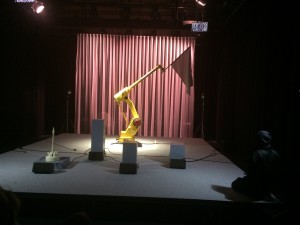