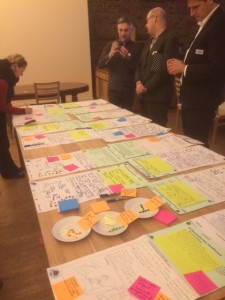 January 31st.; the FET-Observe workshop in Brussels, organized and guided by Philine Warnke and Elna Schirrmeister from Fraunhofer Institute. Some 20 researchers from e.g. computing, art, media, design discussed a series of possible/wishful future technologies within a wide range of topics, including ‘Future Living Spaces’, with the aim to frame topics that  need further focused research and funding. Wonderful to experience a critical but constructive discussion from a variety of disciplines as well as a somewhat out-of-line thinking against many current developments.

“There are many realities. There is no single world. There are many worlds, and they all run parallel to one another, worlds and anti-worlds, worlds and shadow-worlds, and each world is dreamed or imagined or written by someone in another world. “
Paul Auster, Man in the Dark

While my first article here originated from several more theoretically oriented issues concerning the iot and the built environment, it should be obvious that theory only will not provide the solutions needed to really achieve understanding, let alone real practical progress. When summarizing the Onlife Initiative discussion in 2013 it was chairman Luciano Floridi who stated that ‘we should write a Manifesto for mum’ ; illustrating that the Manifesto as discussed that day in July needed a transformation that would make it more accessible for the average citizen. The subtitle of the Manifesto – ‘Being Human in a Hyperconnected Era’ – points to the place and role of humans in a framework that increasingly becomes a mix of bits and atoms, of the digital and the analog, of the real and the virtual. Floridi again, later in his recent book: “the infosphere is progressively absorbing any other space”.(Florida, 2014) This, I would add, includes the ontology of the built environment, as discussed in my former article. END_OF_DOCUMENT_TOKEN_TO_BE_REPLACED

On April 24th. 2013, the Dutch television showed a documentary about other forms of dwelling/living. Many of them tend to a originate from a form of escapism; they concern small units of housing which will be difficult to create and organise on a larger scale. That does not imply that the results, based on inventivity and creativity, are useless of course; mostly however they do not offer achievable solutions for growing cities and large populations but provide options for an – assumed – increasingly nomadic life.